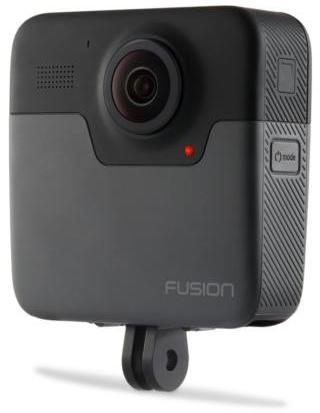 ProTune
Like GoPro's HERO cameras, the Fusion also includes ProTune. If you like more control over your image, activate ProTune and gain manual control over ISO, shutter speed, and exposure compensation.

QuickCapture
When you're on the go, sometimes you need to capture footage at a moment's notice. With just a tap of the record button while the camera is off, you can immediately start recording video or taking time-lapse footage.

Accessory Compatibility
With an attachable two-prong mount, the Fusion is compatible with most standard GoPro three-prong accessories. Flat and curved adhesive mounts are included, as is the Fusion Grip, so you can get shooting right away. Charge the included battery through the USB-C port. For faster charging times, use the separately available GoPro Supercharger.

Fusion Studio Software
Available for free on the GoPro website, Fusion Studio is a PC and Mac compatible program that allows you to process Fusion footage. Connect your camera, and Fusion Studio will walk you through importing, stitching, and exporting your videos for proper editing in your NLE of choice. GoPro's advanced stitching algorithm will stitch out most mounting accessories for a fully immersive 360° experience.